A little bit of history about St. Wilfrid’s:

Around the year 1840, due to the arrival of significant numbers of Irish Immigrants to the area, the Catholic population in Northwich began to rise dramatically – from just a few individuals to well over 2000 by the year 1854. There was no Catholic Church in the town and the place which was used for worship was simply a small cottage in the York Buildings. Obviously this was now woefully inadequate and the search was on for alternative, suitable premises. The former Congregationalist Chapel in Cross Street became available and was the new place of worship for several years.

During this time the congregation continued to grow, collections were taken and funding obtained so that in 1864 it became possible for a suitable plot of land to be purchased. Large enough for a church building and presbytery, with enough space for a school to be added in the future, the chosen location was situated on the main road between Manchester and Chester, adjoining Brewery Meadow.

The construction of the church was carried out by the firm of Leicester and Drinkwater and the cost of the land, the church and the presbytery amounted to £1, 545. The foundation stone for St Wilfrid’s R.C. Church was laid down, by Canon Frith of Stockport on behalf of Bishop Brown, on August 25th 1864. The ceremony was, by all accounts, a rather grand affair with over 3000 people, including many local dignitaries and affluent businessmen. Completed ahead of schedule, in the latter part of 1865, the church was used almost immediately. The official inauguration was held later: August 1866, with a capacity congregation which included large numbers of Protestants – testament to the respect with which Catholicism was held in the area.

The school premises were constructed by the same building firm as the church, at a cost of £600, during the late 1860s/early 1870s. The Parish priest at this time was Father Stanton, who had been appointed on the death of Father Fennelly. During his 10 years at St Wilfrid’s, Father Stanton was responsible for an extension to the presbytery as well as the building of the school. The original school still stands, adjoining the church building. It is now in use as the Parish centre. 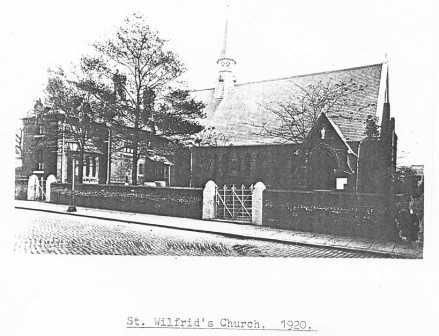 And some uptodate photos too..

We shall be updating this page again soon.