Skip to content
Home » Our Lady of Fatima Church

Our Lady of Fatima, Barnton 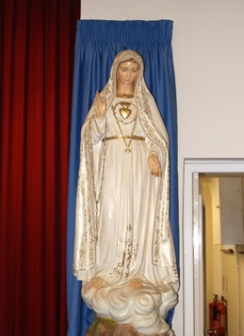 A little bit of history about Our Lady of Fatima:

In June, 1950, for the first time, Sunday Mass was celebrated in what is now known as the Memorial Hall. and it became a Mass Centre for the embryo parish in Barnton.

The dedication of the church commemorates six apparitions of Our Lady to three young children at Fatima in Portugal, between 13 May and 13 October 1917.

Our Lady asked them to pray the Rosary every day for the conversion of sinners and for an end to World War One – which was raging at the time.

To prove to the people that the apparitions were real, Our Lady promised a great miracle for the 13th October 1917 at noon.

The great miracle was the “miracle of the sun” which happened on the 13th October in the presence of 70,000 people who had gathered for the miracle.

At noon the sun appeared to spin in the sky for a full 12 minutes and threw out all the colours of the rainbow and began to move downwards – zigzagging towards the crowd.

The miracle was described as: “The most colossal and public miracle in history”. There is a stained glass window depicting this image in the church.

There were major restructural repairs and renovations in the 1980s, which included a church hall, a new Lakeland Green Stone altar, tabernacle and lectern.